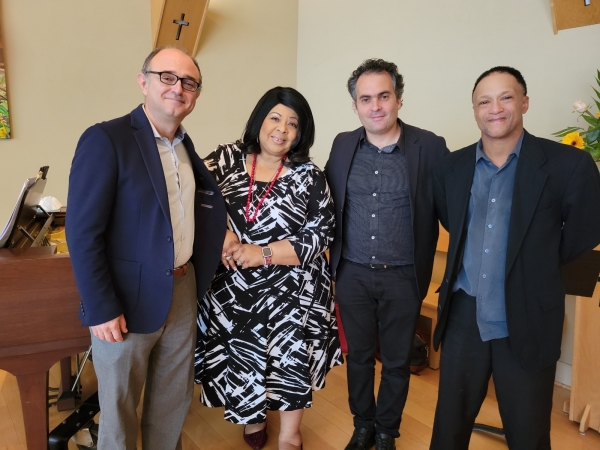 Grew up in a home filled with classical, jazz, blues, R&B and gospel. The youngest of five children, she soon discovered that she had been blessed with her Grandmother's and Mother's gift of song. Her first musical teeth were cut while a member of the family's singing group. Her love of music began to grow even more with her first trip to the Houston Grand Opera. The beautiful lyric, spinto and dramatic soprano voices and gorgeous costumes were heavily embedded in her being. After graduating from Galena Park High School, she matriculated to Texas Southern University further developing her craft. While at TSU, she would become the student of Ruth Stewart and blossomed as a member of the University Opera Workshop and Concert Choir. Both of the aforementioned organizations highly required hours upon hours of study, rehearsals and travel.
After graduating from Texas Southern University, April began her teaching career in HISD and currently in her home district of Galena Park ISD. She later joined the Houston Ebony Opera Guild, main stage artist at the Ensemble Theatre and currently lead vocalist and director of the Trinity Jazz Ensemble. April has toured the United States and Europe sharing her gift of song. April has been blessed to perform with such artist Yolanda Adams, Rev. James Cleveland, Kirk Whalum, Patti Labelle, Kurt Carr, V. Michael McKay, Donnie McClurkin and Kirk Franklin.


April is happiest on stage or in worship singing praises to God. April will tell any and everyone, " I owe all that I am and all that I have to my Mother and Grandmother for raising me in church and instilling in me the love of God and song." SELAH!

Pelayo has been an active pianist in the Houston scene since the late 90s, working solo and with a variety of bands and styles, mostly in the Jazz and the Latin scene.


Since 2005 Pelayo has also been working as an accompanist for dance classes. Currently he is on staff in the University of Houston Dance Department and in the Houston Ballet academy.


Clarinetist, saxophonist and composer, Ernesto Vega is a graduate of the Higher Institute of Art in Havana, Cuba. At the age of seventeen, Down Beat Magazine recognized his interpretative style on the clarinet recalling the legendary jazz clarinetist, Artie Shaw. In 2003, Vega won the first prize at the international jazz competition Jojazz in Havana. He performed with the Lincoln Center Jazz Orchestra and Wynton Marsalis on their visit to Cuba. Ernesto has collaborated with Cuban legends: Frank Emilio, Chucho Valdés, Bobby Carcasses, Ernan Lopez Nussa, Jorge Reyes, and Changuito among others. Ernesto has been a part of several projects involving Arturo O'Farrill & Afro Latin Jazz Orchestra, Joe Sample Orchestra, Havana Jazz Collective, Carlos Maza Quintet, Maria Del Mar Bonet, Yuri Buenaventura and Alejandro Vargas Quartet.Ernesto Vegas' first album "Venir al Mundo," won the Cubadisco Award as the Best Jazz Album of 2009. He has performed at numerous international festivals including Jazz in Marciac (France), North Sea Jazz Festival (Holland), Lausanne Jazz Festival, Jazz on the Green (Trinidad and Tobago) and Jazz Plaza Havana, Cuba. Ernesto Vega is considered one of the leading musicians of his generation and one of the finest clarinetist from the Island of Cuba.