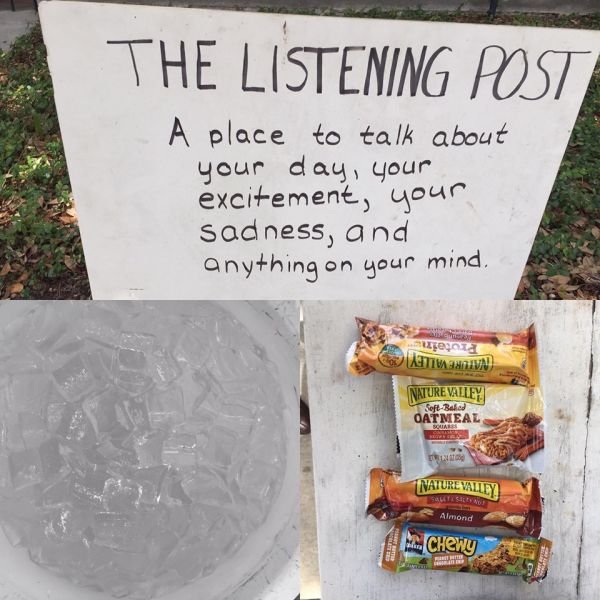 This day was full of want.

Before our gates even unlocked, a parched-looking young man saw my movement and approached. I asked if he wanted water as Father Rich was retrieving the treats, signs, chairs, and water we would set in front of Trinity Episcopal for the Friday Listening Post.


I poured a cup of ice water and apologized for having to pass it through the gates. Before I could complete my sentence, his cup was drained. Father Rich was opening the gates and I poured the man another glass, this time standing face to face.
“You look sad,” I said and he sighed. He was from Mississippi and wanted to go back with his family but he was $16 shy of a ticket for everyone. He said he left his family at the bus station.


“I don’t wanna beg like you see people out here. I went to a couple of places and asked em to put me to work so I could get money to buy a ticket home. But no one had anything. I heard there was a church down the street that could help me so I’m headed there.”
He drank two more cups of water and accepted a protein bar and headed west on Holman.


Often those wandering on the streets are seeking their next cup of water or following a tip of the next place that can help, or looking for a place to rest, or looking for something to distract from their pain.


We were having a funeral service today, so Father Rich was occupied for the first half of the post.


It was 100 degrees in the shade and water was a welcome respite. Some of the regular workers walking past waved as they returned to their jobs. Passing college students laughed and bopped their heads to their music. One student shyly said "hi" and took a wrapped soft oatmeal cookie from the table as her friend rolled her eyes and tugged on her arm to keep them moving.


“Here you need some water," he said to her as I gave them both cups. I asked her if she would like to sit and realized she was still shaking her head no. He told me that he found her on the street after someone had beaten her. She did not want me to call the police.


“I don’t know her, but I chased him away and started talking to her. She told me don’t leave so I’m trying to find her some clothes," he said. Her sweat pants and top were dirty and stained from sleeping on the streets. Someone stole her shoes. "I've been out here a while," she said. They both stayed on the streets but in different “neighborhoods.” He found a space beneath some bushes near a church. She was under the freeway,” where anything can happen,” said the man.


He drank two cups of water. She barely took two sips and said she was ready to go. They headed for the train. Twenty minutes later he returned with a big grin on his face, “ a Christian lady just took the shoes off her feet and gave them to her.” He accepted another cup of water and said, “If I see that guy again, I’m gonna give him a beat down.”


As treats and water left the table throughout the two-hour listening post, a young woman wearing a volunteer badge walked past. I asked her if she wanted water and she stopped and stared at me for a while. I let her look in silence.
She took in the massive old church behind me and the 100-year-old tree giving us shade. She saw the chairs, the water cooler, the sign with the handwritten words from Father Rich, "The Listening Post: A place to talk about your day, your excitement, your sadness, and anything on your mind."


She stared at me for a while longer.
“Come. Sit. Talk to me,” I said motioning to an empty space.
We sat in silence. “I wish people were honest. People lie,” she said.
“Some do,” I responded. More silence.
“I’m glad you are here. I could only tell my story to another woman.”


She has been on and off the streets. She had an abusive boyfriend and left that relationship, returned and finally left for good. She had a lot of tears. I listened and told her, “It is hard to leave what you know but you took care of you. That makes you strong. God calls us Beloved and gives us so much inner strength.” She nodded and smiled at me.


She asked me to pray for her and I offered prayers of protection and strength. Her hands shook as we prayed.


She said her id was stolen. “What if something happens to me. No one will know who I am?” I told her that Lord of the Streets helps people get their identification. She said that would take too long. I asked was she in a safe place, did she have a safe place to stay and she said yes.


As we talked, a man walking by stopped and stared. She got spooked, jumped from her chair and ran around the corner.


Ten minutes before our noon to 2 p.m. oasis was done, an older man who had a hard time walking approached. I offered him water and a seat. He said he was waiting for his ride. He made a call from his phone and told his ride how to find him. From the other direction another woman approached. She was nervous and smoking. I offered her water and she paced and drank and told of being beaten. She needed a place to stay.
We have a booklet from Lord of the Streets showing resources. I called two of the women’s shelters and they were already full and it was only 2 p.m. on a Friday.


I called a third and pushed the button for the immediate need of a counselor. As I tried different shelters, she spoke with Father Rich who had returned from the funeral. I gave her my phone to talk to the counselor and she talked and cried and paced as she gave her family history. It was 2:30 p.m. and I had an appointment with my new therapist and had to leave. I retrieved my phone, asked the counselor did she have a place for the woman and there was none. I had to say goodbye as she continued talking to Fr. Rich. She thanked me for listening to her but I left feeling sad, asking myself, is listening enough?


There was no room for her. All that we could do was give her extra food and water and prayer.


I talked with my new therapist and told him of my full week and the listening post. He explained the importance of acceptance or my depression would worsen. I said that my depression is fueled by what I see as an overwhelming acceptance of suffering.


So I am on a mission to change what I cannot accept. I don’t know where this will lead or what I can do except tell the stories and hope others hear and change happens.