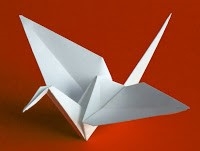 The 1945 atomic bombings of Hiroshima and Nagasaki brought an end to World War II, but the effects lingered on. Sadako Sasaki was a young Japanese girl who developed leukemia as a result of radiation exposure from the blasts. She began folding origami cranes because, according to legend, anyone who folds 1,000 cranes (senbazuru) may be granted wishes for health or good fortune. Sadako completed 1,300 cranes before succumbing to her illness at the age of 12.
Sadako’s story ignited a movement; in the decades since her death the origami crane has become an international symbol of peace, justice, hope, and commemoration. Millions of these cranes have been folded and displayed in peace projects around the world, often in the form of the 1,000 crane senbazuru.
Several years ago a group of Trinity parishioners folded a 1,000 peace crane senbazuru as a spiritual ministry. The cranes were displayed in massive vases in the Morrow Chapel and incorporated into the altar flowers during Easter 2021.
And now, with peace being shattered in Ukraine and elsewhere, we are gifting these peace cranes to our Trinity community as touchstones for prayer. The cranes have been blessed by Reverend Hannah , and many of them contain prayer and Scripture, written on the paper before folding. Cranes will be given out on Sundays during Lent, along with instructions and prayers, beginning March 20.