Did You Know? Testaments in Stained Glass 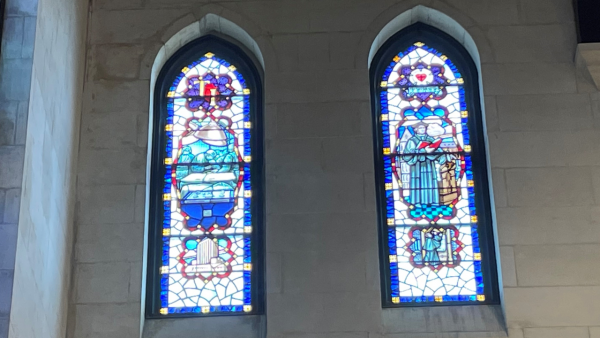 Today we have an excellent bit of history to share about the Stained Glass window in the Sanctuary that was dedicated in honor of Dr. Cooley and in memory of his grandparents.
This article has been provided by The Texas Heart Institute and written by Jeanie Woodruff, Sr. Scientific Medical Editor/Writer, Scientific Publications. The original link can be found at https://www.texasheart.org/did-you-know-testaments...

If you should ever walk through the Main Street door of Trinity Episcopal Church in Houston’s Midtown, look up at the banks of stained-glass windows topping the sanctuary walls. On the left-hand side, you might be surprised to see one that is quite unique and at the same time familiar: the Texas Heart Institute Window.

The stained-glass windows that adorn so many churches typically depict a Biblical character or scene, or perhaps an ecclesiastical symbol. The THI Window is altogether different. Its top portion shows an early version of the THI logo, with a T, a heart, and an I (more about THI logos next week). The middle section depicts Dr. Cooley bending beneath a set of operating room lights during surgery, his team and trays of instruments and devices at his side. In the bottom section, the St. Luke’s Episcopal Hospital/Texas Children’s Hospital/THI building is shown. This image graced the back of the THI Journal for many years and was used so often as an emblem that it was almost a secondary logo during the early and mid-1970s.

The window was commissioned by Dr. Cooley’s mother, Mary Fraley Cooley, in honor of her son and in memory of her parents, Frederick and Ethel McCutchen Fraley. It was designed in Exeter, England, by J. Wippell & Co. Ltd. and was installed and dedicated in 1978.

Trinity Episcopal Church was founded in 1893 as a mission of Houston’s first Episcopal parish, Christ Church Cathedral. In those days, Houston was expanding exponentially, and the burgeoning south end of town was too far from Christ Church in downtown for the faithful to travel. Trinity was established to meet this need. The church was housed in modest wooden buildings for 25 years, until the present neo-Gothic edifice at the corner of Main Street and Holman Avenue was completed in 1921; this new structure was fashioned from Texas limestone. Considered an architectural landmark, Trinity Episcopal Church was added to the National Register of Historic Places in 1983.

Dr. Cooley was a lifelong member of Trinity Episcopal Church. He was baptized there as an infant and memorialized there when he died at age 96. His daughter Florence is also remembered there by her sisters with the Symbolic Flowers Window, which can be seen above the entrance from Holman Avenue. It seems fitting that those who gathered at Trinity to remember and honor him were attended by these meaningful visual testaments to the most vital parts of his life—his work, his family, and his beloved Texas Heart Institute.